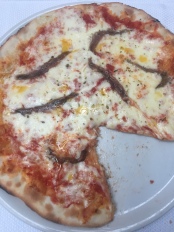 Pizza, pasta, panettone. Some of the delicious joys of Italy, but not for you. Instead, you’re relegated to the fruit and veg stands, the fish, meat and cheese counters. Not such a bad thing really, but while everyone else relishes mouthfuls of spaghetti carbonara, pizza Napoletana and pistachio cream filled croissants, you hang your head like the kid who didn’t get theirs.

Chin up! There are alternatives for us gluten freers that will bring smiles to our faces and indulgent pleasures to our taste buds, without the thumping headaches and itchy rashes. Here are a few of my personal favourites and a few just to have in the cupboard: 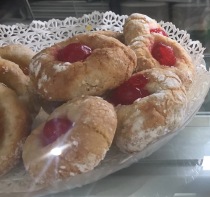 If you want to do as the majority of Italians do, and have a quick coffee at your local bar on the way to work, but you can’t stand the temptation as you watch everyone else dunking sugar dusted brioche into their cappuccinos, then this one’s for you. Pasta di mandorla is a paste made out of ground almonds, egg whites, sugar, almond essence and lemon zest. It’s a classic Sicilian recipe which can be found throughout Italy. The paste is made into soft, chewy biscuits that come in different flavours and shapes.

balls that have been ‘pinched’ before being put into the oven, cherry topped rounds, pine nut covered balls and many more. The variety is endless. If your local bar has one type, they’ll no doubt have three or four types. I’m particularly partial to the ones at the Dolce Capriccio Bar and Pasticceria on the corner of Via Bramante and Piazza Lega Lomarda here in Milan. BTW, where you have your morning coffee is called a bar in Italy, not as us anglo folk say, a café.

Lunchtime. You’re starving. What are your options? A “panino” (a bread role sandwich), a “piadina” (like a soft tortilla sandwich), a slice of “focaccia” (oven baked bread topped with salt and fresh rosemary) or a slice of pizza? In short, none. But wait, there is a quick carby alternative for gluten freers on the go. It’s called “La farinata di ceci”. Made from chickpea flour, water, salt and extra virgin olive oil, the recipe comes from both Tuscany and Liguria and goes by different names depending where you are: “faine” or “faina” in Liguria, “cecina” or “torta di ceci” in Tuscany. While the Tuscans tend to keep it classic, the Ligurians add rosemary or even peas. When I’m at home, I nip across the road to get my farinata at Pizzeria Dell’Angelo on Via Belfiore. You’ll find it in about one out of every three bakeries (usually on display beside the focaccia and pizza) or in some local pizzerias.

I’ve also found it in the form of Panella, a Sicilian version, which is smaller pieces of the same dough fried. Leave it to the Sicilians to rev it up a notch. Either way, it will keep you full for much longer than a sandwich will, not to mention all that chickpea goodness. The only downside is, it disappears from about mid June to mid September. 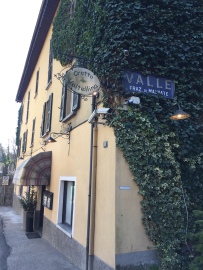 his hearty dish hales from the alpine region of Valtellina, and more specifically from the little town of Teglio where it is considered a national heritage and where you will find the Accademia del pizzocchero di Teglio, an entire institution dedicated to keeping the original recipe alive.

Made of tagliatelle like strips of mostly buckwheat pasta, potatoes, savoy cabbage, butter and cheese, it’s Italy’s rich cousin to Ireland’s colcannon, with its layers of textures and flavours. You won’t find it easily outside of Lombardy, although it’s not uncommon in Milanese restaurants and I’ve also seen it served at an aperitivo buffet. But if you’re looking for the real McCoy head north. One restaurant I would highly recommend is Crotto Valtellina about an hour and a half’s drive from the centre of Milan.

For my liking, not enough pizzerias are serving gluten free pizzas. Take the hugely popular Neapolitan Sorbillo Pizzeria, with branches in Naples, Milan, Rome and one soon to open in New York, yet only the one in Naples offers gluten free pizza. This is a good indication of the general state of affairs. If you’re like me and can tolerate the odd slice now and again, but not really, you’ll succumb, hoping you won’t have to pick up a tube of 1% Hydrocortisone cream the next day. It’s just not good enough! Let’s hope this changes soon. 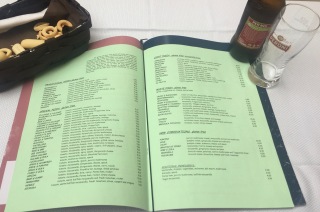 But although we can’t pick and choose, some restaurants do serve gluten free pizzas. I had one in Quinto on the coast of Liguria in August. I thought I was walking into a fish restaurant, but they also had pizza and gluten free at that. In Milan there’s the brilliant Be Bop Pizzeria and Restaurant close to the very trendy Navigli district. I absolutely love this place, with it’s great choice of gluten free pizzas, (see photo above, everything on the menu is gluten free as is the beer and bread basket contents), great atmosphere and friendly and professional service. I’ve also been told that Cook Window do a good selection of gluten free pizzas, but this one I haven’t tried yet, creature of habit that I am.  I’m positive these aren’t the only ones though, it’s just a matter of striking lucky as I did in Quinto or doing a bit of research on the internet. 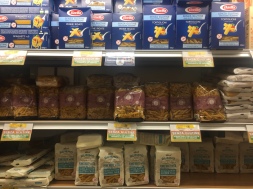 Gluten free at the supermarket

Getting used to a gluten free diet is challenging, especially mentally. How often have I eaten a sandwich, slice of cake, chocolate biscuit, literally feeling my skin prickle before I even put it in my mouth, and yet I ate it anyway. The mind is like a kid who gets fixated on having to have something, then when they know they can have it, they don’t want it anymore. You have to train it, firmly, but with compassion. This is where supermarket gluten free products can really help. Italian supermarkets like Esselunga and Auchan have an excellent choice of gluten free products including flours, pastas, breads, savory and sweet biscuits and even piadinas – those soft flat breads I mentioned earlier.  The key words to look out for are “senza glutine”. So if you must have a chocolate digestive, have one by Schaer, the German, gluten free brand. They’re just as yummy and equally as naughty. I personally rate Garofalo the best for gluten free pasta. And my favourite “gallette” (crackers) are 100% made out of buckwheat by Fiorentini. 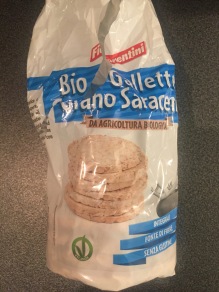